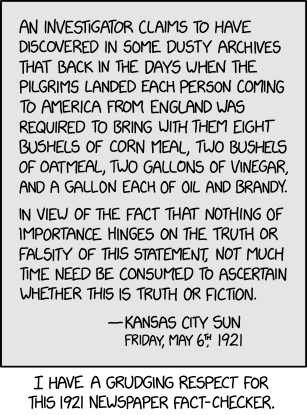 millenix
reply
'Corn' could refer to any grain - cf https://en.wiktionary.org/wiki/corn

thelem
reply
I now want to fact check this. Does anyone have a copy if the Kansas City Sun from 6th May 1921?
Brighton, UK

fallinghawks
I suspect it's a hoax. Corn is a new world food, so it would be rather odd to take something that had likely been imported from North America to England back to North America. I guess it depends on whether England had adopted corn as a crop by that time.

satadru
Maize was being cultivated in the old world by the mid-1500s as per https://en.wikipedia.org/wiki/Maize#Columbian_exchange

It is reportedly the first time it has ever happened at a Major League Baseball game: A player who left a game came back in. This is disallowed by the rules, yet nobody noticed. But did it happen?

The Red Sox were losing 16–3 in the top of the ninth. To avoid tiring out their pitchers, the team chose to have their first baseman Mitch Moreland take over as the pitcher.¹

As the game drew to a close, it came time for the player in seventh position to come to bat, but instead of the replacement first baseman, the original Designated Hitter Chris Young came to the plate. (He hit a single, later advanced to second base, but made no further progress by the time the game ended.)

Under the rules of baseball, a player who has been replaced may not return to the game, but there it just happened. And nobody said anything. (Reportedly, the Orioles noticed but chose not to say anything.)

What makes this confusing is that I've seen two different game summaries, and they disagree as to whether Chris Young actually left the game.

In this game summary, if you go to Play-By-Play and scroll down to Baltimore Orioles – Top of 9th, you'll see

According to this game summary, Young did not exit the game but took over in left field. This is permitted according to the rules, in which case he retains his position in the batting order, and the new first baseman (Ramirez) takes over the batting position of the former left fielder.

If that game summary is correct, then nothing improper happened. It was definitely unusual, but no rules were broken.

On the other hand, this game summary does not mention that Young entered the game on defense. If that second summary is correct, then we indeed have a case of a player who left a game magically returning to it.

Does anybody know what actually happened?

Bonus chatter: The organization that runs professional baseball in the United States is called Major League Baseball, which is a bit of a misnomer because it actually a consists of two top-level leagues (the so-called National League and American League), as well as a number of lower-level minor leagues, so it should more properly be called Major Leagues Baseball. But nobody calls it that.

¹ Recently, position players are increasingly being called upon to pitch. This has historically been an uncommon occurrence and a source of amusement because, as a general rule, non-pitchers are not very good at pitching; that's why they're not pitchers. It typically occurs only in lopsided games where the team doesn't want to tire out their pitchers in a lost cause.

² As a general rule, pitchers are very poor at batting. To make the game more interesting, one of the professional leagues introduced a rule that allows a team to nominate another player to bat in place of the pitcher. Some people think this is a stupid rule.